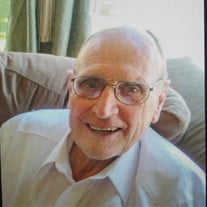 Obituary for Wilford Walter Ruf A valiant spirit returned home after an 89-year sojourn on earth. Surrounded by family, Wilford Walter Ruf passed away peacefully in his home on June 16th 2021. He was born November 12th 1931, the 3rd of 4 children, the only son to Walter Herbert and Lina Gilgen Ruf in Bern, Switzerland. Influenced by his older sisters, he was a good student and spoke many languages including Swiss, German, French, Spanish, and English and qualified for the gymnasium (which is considered an academic honor) in Switzerland. However, at the age of 17, he immigrated with his family to the United States of America. From the moment he arrived on American soil, he considered himself an American and loved this country, heart and soul. After completing an honorable 2 ½ year mission for the Church of Jesus Christ of Latter-Day Saints in the South-Western states, he married his eternal companion, JoAnn Smith in the Idaho Falls Temple on August 18, 1955. During their 66 years of marriage, they were blessed with 10 children (two of whom are perfect 😉), 46 grandchildren, and 46 great-grandchildren. Dad was an example of how one walks in faith, come what may. He helped care for his two special-needs children born at the end of their family until his dying day. His greatest legacies to those who love him are his testimony of Jesus Christ, Joseph Smith and the restored gospel. Others include, His powerful prayers, his example of sacrifice for the good of others, and the mercy which he extended to all. His focus was rarely upon the things of this world. He often was found preparing and serving meals to family, neighbors, and visitors—his door was always open, and everyone was welcome. To the end, he was still serving the caregivers that came to assist with LaPrele and Wilford. He never boasted of himself, or sought for prominence, power or prestige. He is remembered and spoken of with humility and reverence by those who were served by, or knew him. He was no respecter of persons. He often looked for “the one” as he defended the defenseless, sought out the downtrodden, and raised the hands that hung down with his big smile and encouraging love. Throughout his life, he felt empathy toward others in trial and uplifted them by freely sharing his testimony of the restored gospel of Jesus Christ. He would often say “no one said it would be easy; but it will be worth it.” He loved studying the scriptures and the gospel and he loved to teach. One of his favorite callings was as Gospel Doctrine teacher, a position he held for over 20 years. His life was a reflection of what truly motivated him. He was faithful to his beliefs and covenants and magnified his callings as a servant of the Lord and as patriarch to his family. Dad is survived by his wife JoAnn Smith Ruf; children: Marianne Tawareguci, Daphne (Dirk) Baum, Caralee (Jim) Jewkes, Emalina (John) Vincent, Rosalie Noyes, Elizabeth (Steve) Hathenbruck, Wilford M. Ruf, Adrian (Jill) Ruf, Lottie LaPrele Ruf, Walter (Marci) Ruf, and many grand and great grandchildren; and his sister Lotti Anderson. Preceded in death by his parents, Walter and Lina Gilgen Ruf, his sister Eliza Ruf Fife and his sister Evelyn Ruf Smith. Viewing and Funeral Services will be held on Monday the 21st of June at 1050 E. Galena Dr., Sandy, Ut. Viewing from 9:30-10:45 am. Funeral will follow at 11:00 am.

Obituary for Wilford Walter Ruf A valiant spirit returned home after an 89-year sojourn on earth. Surrounded by family, Wilford Walter Ruf passed away peacefully in his home on June 16th 2021. He was born November 12th 1931, the 3rd of 4 children,... View Obituary & Service Information

The family of Wilford Walter Ruf created this Life Tributes page to make it easy to share your memories.