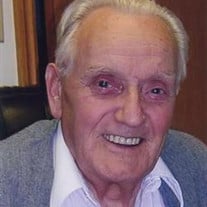 Our beloved father, grandfather, and great-grandfather Wilfrid Clark passed away at his home on October 16, 2014 in South Jordan, Utah at the age of 93. Wilfrid was born on February 26, 1921 in Manchester, England to Henry Clark and Catherine Taylor. He grew up during the darkest hours of the depression, leaving school at an early age. He served with honor in the British Army during World War II. During his earlier years he was a shoe cobbler by trade. Married Doris Stephens on October 3, 1939 in Manchester England. Later solemnized in the London Temple. Wilfrid heard and embraced the message of the restoration and joined The Church of Jesus Christ of Latter-Day Saints on June 9, 1951. He had a great love and knowledge of the gospel and served faithfully in many callings. He served a LDS Mission with his wife Doris to the London Temple 1984 – 1985 where he served as a Temple Sealer. In 1961 with his family he immigrated to the United States settling in Salt Lake City, Utah. Wilfrid was instrumental in the success of Sam Weller’s Zion Bookstore. His extensive knowledge of used and rare books especially LDS titles, and his outgoing personality made him very popular and sought after by customers. Family was most important to him. This was demonstrated in the relationship he had with his wife throughout their marriage and especially his love and care of her toward the end of her life. He was a loving father that taught by example. His joy came in watching his children succeed. He was a terrific grandfather who loved and was interested in what his grandchildren were doing. He gave freely of his attention and his time to them. His love of family extended beyond the veil. He loved doing genealogy and Temple work for his ancestors. He loved to learn new things. He learned to operate a cell phone and a computer in his 80’s. He was a true gentleman and a friend to all he met. Our lives have been enriched by having known him. He will be greatly missed. Survived by his three children, Jeanette Burns (Darrel), Graham Clark (Stella), and Andrew Clark (Holly). 16 grandchildren, 20 great-grandchildren, and 3 great great-grandchildren. Preceded in death by his beloved wife Doris, parents, and 5 brothers. A viewing will be held Wednesday, October 22, 2014 from 6 – 8 pm at the South Jordan Highland 2nd ward, 9800 South Dunsinane Drive. Funeral Services will be held at the same location on Thursday, October 23, 2014 at 12 noon. A viewing will be held prior to the funeral services from 10:45 – 11:45 am. The family expresses appreciation to Access Hospice for their compassionate care of our father.

Our beloved father, grandfather, and great-grandfather Wilfrid Clark passed away at his home on October 16, 2014 in South Jordan, Utah at the age of 93. Wilfrid was born on February 26, 1921 in Manchester, England to Henry Clark and Catherine... View Obituary & Service Information

The family of Wilfrid Clark created this Life Tributes page to make it easy to share your memories.