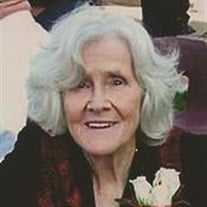 Willia “Faye” Smith Kemp 1923 ~ 2011 “Beloved Mother and Grandmother” Our beloved mother, grandmother, great-grandmother, aunt and friend, Faye Kemp, passed quietly into eternity with her daughter and son-in-law by her side, June 28, 2011, at their home in Holladay, Utah. She continuously blessed the lives of others for 88 years. Faye was born in Ursula, Arkansas, February 15, 1923 to Myrtle Jane Gragg and William Thomas Smith. She was the 11th of 14 children. At a young age she and her family moved to Oklahoma where Faye grew up and attended school. During World War II she moved to San Diego, CA to work in the war effort. Faye met her future husband Reginald E. Kemp while he was stationed there in the Navy. They married April 4, 1946 in Yuma, Arizona. They lived in NH and CA. She and her husband Reg had two children, Reginald Jr. and April Renee. They enjoyed camping and traveling throughout the United States. They had eighteen beautiful years together, but were later divorced. Faye loved her family and devoted her life selflessly serving them and her fellow man. Faye was a convert to the Church of Jesus Christ of Latter-day Saints. She loved serving in the Church’s Relief Society as well as other callings. She was an ordinance worker in the Los Angeles Temple, and served a full time mission in the Columbia-South Carolina Mission at the age of 71. She loved the Lord with all her heart. Faye was loved by everyone who knew her, and touched the lives of countless people. She had a fiery spirit and southern charm. Faye had a great sense of humor and fine intellect. She loved reading and writing. She was a quiet strength and powerful example to her family and others. Through her faith, diligence, and endless prayers, she has forever blessed the lives of her family. She was the wind beneath their wings. Faye is survived by her daughter, April Elzinga (Jerry), fourteen grand-children, and twenty-two great-grandchildren. She was preceded in death by her parents; six brothers, and seven sisters; and son, Reginald Kemp Jr. Funeral services will be held 11:00 am, Tuesday, July 5, 2011 at the Cottonwood 4th Ward Chapel, 5565 Neighbor Lane, (1610 East), Salt Lake City, Utah with a viewing prior to services at the church from 9:45 to 10:45 am. Interment at the Holladay Memorial Park. The family wishes to thank CNS-Love Hospice of Utah for their devoted, kind and tender care. A warm thank you to Holladay Healthcare Center for their loving care before Faye’s hospice began at her daughter’s home. A special thanks to Jared Fairbanks at Premier Funeral Services, and Sandea Kilpatrick at Holladay Memorial Park.

The family of Willia Faye Kemp created this Life Tributes page to make it easy to share your memories.