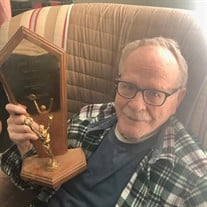 William (Bill) Duncan Child, age 79, passed away peacefully at his home in American Fork, UT on March 2, 2020 after many years of declining health. Bills last week on earth was filled with laughter, memories and endless visits from his sons, family and friends. Bill grew up in Bountiful, UT. In 1959 during his senior year in high school he was honored as the outstanding athlete of the year at Bountiful High. He exceled in baseball, basketball and football. After high school he served a mission for the Church of Jesus Christ of Latter-Day Saints in New England, on his return enrolled at BYU where he double majored in History and English. He carried a passion for business his whole life starting multiple businesses providing many jobs and opportunity for others throughout his career. He had a sharp wit and casual charm that was blended with a fiery personality that made his life an adventure. He was an out of the box thinker, always searching for truth, following the intellectual path where it leads. Always entertaining and full of unusual conversation and non-judgmental attitude, he was a live and let live kind of guy. He was always in a hurry, speed walking his way through life, the destination was never the goal, but getting there quickly was. He found a simple satisfaction in finding good food, cooking good food and sharing the food with others. He detested red lights, slow service and other minor inconveniences which added to his charm. Bill is predeceased by his parents, Wallace R Child and Frida Duncan Child; his brothers Richard Child and Gregory Child. He is survived by siblings Allen Child, Patricia Child, Linda Petty and David Child. He is also survived by his first wife, Suzanne Boyce King and their Children; Tyler Child (Dori), Truman Child (Carolyn), Ben Child (Heather) and Casey Child (Shannon) and their 12 Grandchildren. He is also survived by his current spouse of 32 years, Linda Westland Child and her children; Jennie Kasteler (Darrin), Joshua Bell, Samuel Bell (Rachel) and Ian Bell (Tanya) and their 8 grandchildren.

William (Bill) Duncan Child, age 79, passed away peacefully at his home in American Fork, UT on March 2, 2020 after many years of declining health. Bills last week on earth was filled with laughter, memories and endless visits from his sons,... View Obituary & Service Information

The family of William (Bill) Duncan Child created this Life Tributes page to make it easy to share your memories.