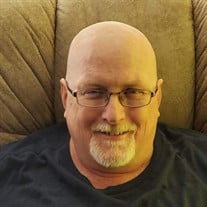 William “Bill” Clinton Davis 1965 - 2021 William “Bill” Clinton Davis, 55, of Payon, UT, passed away after his long battle with cancer on the morning of Thursday, August 12, 2021, with his wife at his side. Bill was born September 14, 1965, in Payson, UT, son of Keith and Joan Davis. Bill attended Payson High School and lived in Utah County and Sanpete County his whole life. He married the love of his life, LeeAnn Davis (Loveridge), on October 3, 1987; they were later sealed in the Manti Temple on March 23, 1995. Together they had two children Dallas Marrie Williams (Richard Williams) and Tyson Clinton Davis (Nicole Baum Davis). Bill was known for his fierce love and devotion to his family and especially his wife, LeeAnn Davis. Bill worked second and sometimes third jobs to help provide for his family and took on the responsibility of caretaker after his wife had a debilitating stroke. Bill enjoyed fishing, gardening, and spending time with his grandsons, Ezra and Edison Davis. Bill leaves behind his mother Joan Davis of Payson UT, his wife of thirty-four years and the love of his life, LeeAnn Davis, his two children; Dallas (Richard) Williams of Payson UT, Tyson (Nicole) Davis of Stewartstown PA, and his two grandchildren; Ezra Davis of Stewartstown PA, and Edison Davis of Stewartstown PA, his siblings David Davis of Payson UT, Sherane Busy of Springville UT, Helen Hendrickson of Post Falls ID, and Sheldon Davis of Lehi UT. He was preceded in death by his Father, Keith Davis. Funeral services will be 11:00 am, Monday, August 16, 2021 at The Church of Jesus Christ of Latter-day Saints chapel at 274 South Main Street, Payson, Utah 84651 where a viewing will be prior to services from 9:45 to 10:45 am. Interment at the Payson City Cemetery.

The family of William "Bill" Clinton Davis created this Life Tributes page to make it easy to share your memories.