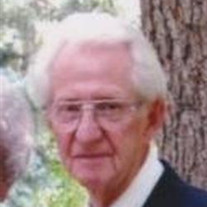 Our loving husband, father, grandfather, great grandfather and great great grandfather, William Earl Davidson, returned home to his Heavenly Father on May 26, 2015. Bill as he was known to his family and friends was born on July 9, 1920, in Grace, Idaho to Don A. and Ruth Eleanor Obray Davidson. When he was a small boy his family moved to Garfield, Utah where he spent his boyhood days during the depression. During his first year of high school his family moved to Salt Lake City where he attended and graduated from Granite High School. Shortly after high school graduation Bill met his eternal sweetheart Marcella Barker and they were married on August 22, 1941. Bill had a beautiful baritone singing voice. Following his service in the Merchant Marines during World War II he returned home and moved his wife and two little girls to Los Angeles, California where he was the baritone soloist with some of the big bands that were so popular at that time. They later moved back to Utah settling in Murray where they raised their three children Georgia, Billie Donnell and William Jr. (Will). Dad loved his family and was a wonderful example to them. Bill loved the outdoors and enjoyed hunting and fishing and camping trips with his family. Bill was a member of the Church of Jesus Christ of Latter-day Saints and served in many callings throughout his life especially loving the years that he and Marcella served together in the Jordan River Temple. He is survived by his wife of 73 years, Marcella; Children Georgia (Garry) Foote, Will (Jeanine), 17 grandchildren, 68 great grandchildren, and 30 great-great grandchildren. Preceded in death by his daughter Billie Donnell DeOllos, parents, 3 brothers, 3 sisters, 3 grandsons and 1 great grandson. The family would like to express a special thanks to Tammy from Midas Creek Hospice, and an extra special thanks to his grandson’s Dan DeOllos and Jonathan Davidson for the extra special love and care they gave their grandfather especially the last six weeks of his life. Funeral Services will be 1:00 p.m., Monday, June 1, 2015 at the Little Cottonwood 12th Ward, located at 6180 South Glenoak Street (855 East), Murray, Utah, with a viewing one hour prior to services. Burial will be at the Salt Lake City Cemetery.

The family of William "Bill" E Davidson created this Life Tributes page to make it easy to share your memories.