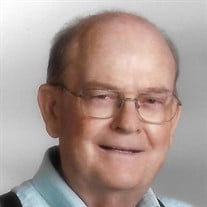 William Fox 1934 – 2020 Our dear father and grandfather passed away peacefully in his home in Provo, Utah on Sunday, May 24, 2020 surrounded by loving family members. He left a legacy of love, dedication, faith, and service. William was born to Josephine Miceli and Charles Samuel Fox on November 16, 1934 in Tooele, Utah during the Great Depression. He was the third of four children in his family, two of whom preceded him in death. He spent most of his life in Utah where he attended school and graduated from Tooele High School in 1953. After high school, he worked at the Tooele Army Depot and attended the University of Utah for a semester. William enlisted in the United States Army on February 19, 1954 and served in the Korean War. He was sent to basic training at Fort Ord, California. He later traveled by ship to Korea on the USS Breckinridge and was stationed in Incheon and later Pusan, South Korea. He served in Korea for six months before being transferred to Sendai, Japan and worked in a bridge building platoon. He became active in the Church of Jesus Christ of Latter-Day Saints during this time and then went to IX Corp and Tokyo. William was also in the Ninth Corp and First Calvary Division where he worked as a clerk typist and combat specialist. He was discharged from the United States Army as a Sergeant after serving honorably for 34 months. After serving in the Army, William enrolled at Brigham Young University where he majored in Secondary Education with a History minor. He went on to earn a Master’s Degree in History with a Minor in Religion in 1966 and earned a Doctorate Degree in Curriculum, Teaching and Methods in 1984. William was married to Audrey McCoy from March 1957 to December 1959. They were blessed with a son, Russell. William later married Jewell Mott on July 27, 1960 in Elko Nevada. They were sealed one year later in the Manti Temple. They were blessed with two sons, Greg and Darren. William began teaching US and World History at Orem High School in 1962 until 1966. He then taught at BYU in the newly organized Lamanite Program, a nationally recognized model for teaching and graduating Native American students. Because of the success of this program, William was nominated and received the prestigious Karl G. Maeser Excellence in Teaching Award and was also named honorary Chief by the Lamanite student organization, known as the Tribe of Many Feathers. He then taught in the History department at BYU until the Fall of 1999. William developed the Relational Teaching and Relational Learning process, which he used in his profession and also in his church calling lessons and discussions. He will always be remembered for his dedication and love to his family. William loved to spend time with his family and valued hard work. His dedication and love to his sweetheart, Jewell, was evident and exemplary throughout his life. He had a deep love for the Gospel of Jesus Christ and always strived to be a good example to his family and others around him. He was full of life and love that will always be cherished by his family and loved ones. William is survived by his brother Jay (Dawn) Fox, sons Russell (Natalie) Bryant, Greg (Debbie) Fox, Darren (Kim) Fox, 11 grandchildren, and 3 great-grandchildren. The family expresses their heartfelt gratitude and appreciation to the Grandview 5th Ward family and First Choice Home Health & Hospice for their loving and kind care for William. A viewing will be held on Friday, May 29, from 6:00 pm to 8:00 pm MT at Premier Funeral Services located at 1160 North 1200 West in Orem, Utah (84057). Social distancing guidelines will be in effect. A graveside service for the family will be held on Saturday, May 30th.

William Fox 1934 &#8211; 2020 Our dear father and grandfather passed away peacefully in his home in Provo, Utah on Sunday, May 24, 2020 surrounded by loving family members. He left a legacy of love, dedication, faith, and service. William... View Obituary & Service Information

The family of William Fox created this Life Tributes page to make it easy to share your memories.

Our dear father and grandfather passed...