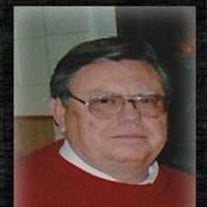 Our husband, father, grandfather, Son, brother, and Uncle was called home on the afternoon of October 28th 2014 with his wife by his side. Bill was born March 2, 1944 to William A Wayne and Rosemary Cox Wayne Alder in Salt Lake City, UT. He was the oldest of their 6 children. (William, Pat, Wendy, Kerry, Robyn, Sheldon) In June of 1965 he married Kathleen Bell – later divorced. He married Charlotte Hall Thomson November 1983. She was the love of his life. They shared 30 years together. Bill served for several years in the US Navy. He received degrees in Business, Finance, Real Estate and Computers. Bill has achieved many accomplishments in his 70 years of life here on earth. He was an avid collector – collected many different things. Dad enjoyed farming, raising animals – he always had a project. He was very fond of Model A’s and other old cars. He loved to show off his Studebakers. Timing the racers on the Salt Flats every September was also one of his joys. Over the years, he took advantage of the opportunity to serve faithfully in a variety of callings in the Church of Jesus Christ of Latter-day Saints. He just received his Duty to God award. He enjoyed being a mission leader. Bill was a proud member of the American Legion Post 31. Bill is survived by his wife Charlotte;, His children Terrie (Angel) Rodriguez, Stacey (Bruce) Nielsen, KD (Rich) Costin, William J (Tracey) Wayne, Heather Anderson, Gerald D (Tina) Wayne, Jessie (Dean) Kipp, Merry (Cody) Riddle, Michael (Tara) Wayne, Kristie (Patrick) Schindler. Step-children: Raymond (Tammy) Thomson, Laura (Dan) Privett, Kevin (Joanne) Thomson, Jenny (Joey) McKnight. 41 Grandchildren and 4 Great Grandchildren. His mother Rosemary and his siblings; as well as many other family members and lifelong friends. He is preceded in death by his father William A Wayne. The family would like to thank the personnel at Mt Olympus Rehab for their kindness to Bill in his last days. Graveside service will be held 11:00 am Saturday November 8th at the Manti City Cemetery. In lieu of flowers, donations are encouraged to be given on dad’s behalf to the American Legion Post 31, 165 S Main Street Manti, UT 84642. Till we meet again; “Savior stay this night with me, behold “tis eventide…”

Our husband, father, grandfather, Son, brother, and Uncle was called home on the afternoon of October 28th 2014 with his wife by his side. Bill was born March 2, 1944 to William A Wayne and Rosemary Cox Wayne Alder in Salt Lake City, UT. He... View Obituary & Service Information

The family of William "Bill" Gerald Wayne created this Life Tributes page to make it easy to share your memories.

Our husband, father, grandfather, Son, brother, and Uncle was...