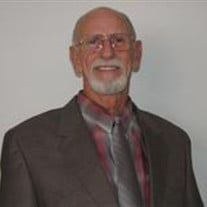 William Lance Harmon passed from this earth on March 29th, 2013. He is adoringly remembered by his loving wife, Ellen Price. He will be missed by his mother, Audrey Lay, his sister Barbara Malm, daughters Jessica Menasian, Adra Taylor, Kristi Johnson, Sons Wayne Harmon, Robert Harmon, Scott Price and Jeff Price along with many grandchildren, relatives and friends. Bill will also be missed by his faithful traveling companion, Princess who also mourns his passing. Bill and his loyal best friend shared many miles together when Bill was on the road as a truck driver. Prior to becoming a truck driver, Bill proudly served his country in the United States Navy from 1965 to 1968. Bill was renowned as a world class handyman and could often be found fixing things. His road trips frequently took him to Texas where he was able to serve his mother and sister as a Mr. Fix It. Bill took great joy in mechanics, technology, flying his RC helicopters, and laboring with his hands. Bill enjoyed nature, often stopping to take time to appreciate the blessings and miracles found in nature’s beauty. He had countless hobbies and touched the lives of many. Bill was baptized into the Church of Jesus Christ of Latter-day Saints on April 11, 2011 and went on to receive the Priesthood. The church was an important part of his life and he professed his love in his actions as well as his words. Bill was preparing to enter the temple when he passed away. He will be missed by the countless lives that he touched while he was here. His family is grateful for his life and for his is spirit that and will always be with them. Services will be held this Thursday, April 4, 2013 at The Church of Jesus Christ of Latter-day Saints, 1289 East 300 South, Provo, Utah 84606. A viewing will take place at 5:30 PM followed by a service at 6:30 PM. In lieu of flowers, please remember Bill by donating to the William Harmon Memorial Account established at Security Service Federal Credit Union (Provo Branch) by calling (801)488-6725. Interment in Fort Worth, Texas

William Lance Harmon passed from this earth on March 29th, 2013. He is adoringly remembered by his loving wife, Ellen Price. He will be missed by his mother, Audrey Lay, his sister Barbara Malm, daughters Jessica Menasian, Adra Taylor, Kristi... View Obituary & Service Information

The family of William "Bill" Lance Harmon created this Life Tributes page to make it easy to share your memories.