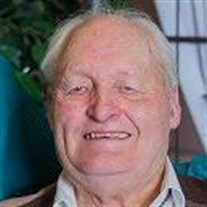 William Hyrum McClain 1936- 2017 William Hyrum McClain, our loving husband, father, grandfather, and great grandfather, passed away peacefully at home in Salt Lake City on January 19, 2017. Bill was born on December 8, 1936 in Pioche, Nevada to George Albert McClain and Mollie Dalton. He married Carol Louise Palmer in 1957. Together they are the parents of 8 children who Bill loved deeply and who he was extremely proud of. After a courageous battle with Alzheimer’s, Daddy returned to his Father in Heaven. Preceded in death by his parents, his brother Albert McClain, his sister Rowena Haran, his daughter Candi, and his grandson Jason. He is survived by his devoted wife Carol, his brother Ralph, his children Cindy (Martin), Cheryl (David), Crystle (Gary), Camra (Ron), Cricket (Dave), Carrie (Bruce), Dustin, son-in-law Todd, 34 Grandchildren and 34 great grandchildren. Funeral services will be held Wednesday, January 25th, 11:00 am at the Winder 7th Ward, 4350 So. 1100 E. with a viewing from 9:30 – 10:30 am prior to services. Interment will be at the Elysian Burial Gardens. Our family would like to thank Inspiration Hospice and all the nurses and others who helped Bill for their dedicated service.

The family of William Hyrum McClain created this Life Tributes page to make it easy to share your memories.