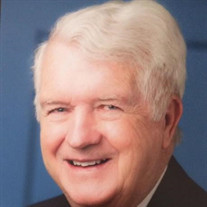 William F. Means 1930 - 2017 Our beloved husband, father, grandfather, great-grandfather, uncle and friend left this earthly life surrounded by loved ones on November 5, 2017. Born September 27, 1930 in Los Angeles to Mary Wealthy Child and Royal William Means, he treasured his youth and growing up with his eight siblings. Bill devoted his life to the service of his family, his Heavenly Father, his country and his community. He shared nearly 63 blissful years with his bride, Colleen Farrer. Together they brought seven wonderful children into this world. Bill served in the Korean War for two years. He served five LDS missions: the Northern States mission, two stake missions, and the last two with his wife at the employment office on Welfare Square; and a wonderful year in Nauvoo, Illinois. He also served as a temple ordinance worker in the Salt Lake Temple. He was a graduate of South High School and the University of Utah, earning a BS and a Master’s Degree. He worked as an educator and counselor in the public school system. He is survived by Colleen, devoted children; David (Brigitte), Linda Sansom (Greg), Mary Ferguson (John), Billy (Connie), Susan Olson (Keith), Julie Wardle (Brook), Deborah Nord (Darren), 22 grandchildren and 24 great-grandchildren. Funeral Services will be held 11:00 am, Friday, November 10, 2017 at the East Millcreek Stake Center (3103 East 3600 South (Craig Drive), Salt Lake City, Utah) where a viewings will be held one hour before services and on Thursday, November 9, from 6:00 to 8:00 pm.

The family of William Frederick Means created this Life Tributes page to make it easy to share your memories.