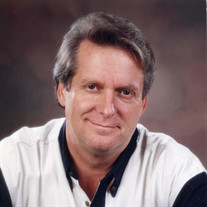 William Nicholas Muir, better known as Nick, was born on December 14, 1946 on the Presidio of San Francisco in Letterman Hospital shortly after WWII. His father, Sylvester William Muir and Dorothyann Groesbeck Muir preceded him in death. They were very fine parents and an incredible example to their children in every way. His twin sisters, Dorothy Jeanne Muir and Sylvia Joan Muir Harper are 5 ½ years older than he. Nick had no children. He celebrated his recent birthday with Jeanne and a few of his close friends. Nick passed away on February 28, 2022 at Highland Care Center located at 4285 Highland Drive in Salt Lake City, Utah. He had lived there for about 6 months. Before living at Highland Care Center, he had lived for many years at Life Care Center of Bountiful, Utah. Nick graduated from BYU Provo with a bachelor's in psychology. As a Junior, he was in charge of Homecoming Week at BYU, with all of its festivities. He was told by a member of the faculty that the Homecoming Parade was the best organized he’d seen. Nick grew up in Palo Alto, California, the home of Stanford University and graduated from Palo Alto High School. He was extremely friendly and throughout his life he always had a lot of friends. When he was five years old, mother gave him a birthday party with all the boys in his class and one girl whom he liked a lot. Apparently, all the boys liked this girl. They all sought her attention by misbehaving. Mother learned her lesson. She said she would never do this again. It was typical for Nick to often have several friends over after school, even at an early age. Nick served a mission for the Church of Jesus Christ of Latter-day Saints in Brisbane, Australia. The summer after his return, he traveled to some parts of the country selling Britannica Encyclopedias with friends he had met on his mission. He earned a lot of money and he had a good time. After he graduated from BYU Provo, he spent the rest of his life in the Provo and Salt Lake City area. He has his own photography business and the exceptional ability to capture the personalities of his subjects. His photograph of his father and his maternal grandmother, Lucile Groesbeck, are family treasures. He was a very hard worker. Unfortunately, in November of 2002, he fell off the second story of his home, landed on his head, and suffered a serious head injury. That he survived was a miracle. He would suffer other physical adversities, but he never let them any of these get him down, continuing to be the bright spot in the lives of all who had the privilege of working with him or being in his presence. Throughout his life he was well loved. A Graveside Service will be held at 1:00 p.m. on, Thursday, March 3, 2022 at the Salt Lake City cemetery, where he will be buried next to his parents. Please enter the cemetery on the corner of 4th Ave and N. Street, follow Main Street up to Wasatch and Turn Left. The grave will be on the right.

William Nicholas Muir, better known as Nick, was born on December 14, 1946 on the Presidio of San Francisco in Letterman Hospital shortly after WWII. His father, Sylvester William Muir and Dorothyann Groesbeck Muir preceded him in death. They... View Obituary & Service Information

The family of William Nicholas Muir created this Life Tributes page to make it easy to share your memories.