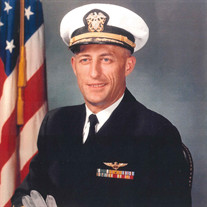 William Theral O'Bryant, Captain USN, ret. 1920-2018 William Theral O’Bryant passed away peacefully at his home in Lehi, Utah, on April 12, 2018. He was born on June 26, 1920, in Garland, Utah, to William Jackson and Zora Haws O’Bryant. He and his younger four brothers and one sister were raised in Belle Fourche, South Dakota, where he graduated from high school in 1938. Theral graduated from the U.S. Naval Academy with a Bachelor of Science degree in Naval Science on December 19, 1941, just 12 days after the attack on Pearl Harbor. He then served as the Plotting Room Officer on the heavy cruiser U.S.S. Tuscaloosa, controlling the fire of the main battery of guns, on D-Day, June 6, 1944, during the invasion of France in World War II. Theral became a Naval Aviator at Pensacola, Florida, in October 1945, just as Japan surrendered. In 1946 Theral began serving as the executive officer of Meteorological Squadron Three in tracking and flying through hurricanes in the Caribbean Sea and the Gulf of Mexico. He subsequently earned his Bachelor of Science degree as an Aeronautical Engineer at the U.S. Naval Postgraduate School at Monterey, California, in 1954, and a Professional Degree as an Aeronautical Engineer at the California Institute of Technology in Pasadena, California, in 1956. During his naval career Theral directed teams of engineers in the design of heavy attack aircraft, air-to-air guided missiles, and in the research and development of the U.S. Navy’s space program. He then retired from the Navy as a Captain in 1965 and became the Director of the Scientific Exploration of the Moon at NASA during the Apollo lunar landings. He received the NASA Medal for Exceptional Scientific Achievement after the Apollo 11 landing in 1969. Theral married Jane Stringham in Los Angeles, California on March 25, 1950. Their marriage was solemnized in the Salt Lake Temple on March 28 of that same year. Theral and Jane were blessed with six daughters and two sons. Theral also had a daughter from a previous marriage. Theral enjoyed traveling extensively with Jane. His interests were many, among them building telescopes, family history, and jogging. Because of military transfers, he relocated his family many times, but his primary residences were in the Washington, D.C area, Mesa, Arizona, and Bountiful and Lehi, Utah. He took his family on many memorable camping and cross-country road trips. Theral was a faithful member of the LDS church, serving as a branch president, in several bishoprics, bishop of the McLean Ward in McLean Virginia, high councilor, High Priest Group Leader, and home teacher. He and Jane served two missions, in Coventry, England, and Palmyra, New York. Theral is survived by his wife, Jane, and eight children: William Bruce O’Bryant (Cheryl) in San Antonio, Texas, Susan Jane Brasher (Craig) in Cottonwood Heights, Utah, Elizabeth Ann McCreary (Lauri) in American Fork, Utah, Catherine Elaine Shelley in Albuquerque, New Mexico, Laurie Lynn Orton in Friday Harbor, Washington, David Walter O’Bryant (Stephanie) in Sandy, Utah, Lucinda Lee Hill (Burke) in Highland, Utah, and Kelly Jan Roberts (Paul) in Rexburg, Idaho. He is predeceased by a daughter, Gail Freundt, and a son-in-law, Charles Shelley. He is also survived by 30 grandchildren and 34 great-grandchildren. The funeral services will be held at 11:00 am Saturday, April 21, 2018, at the Ivory Ridge Chapel, 127 East 3200 North, Lehi, Utah, where a viewing will be held Friday, April 20, 2018, from 6:00 to 8:00 pm and Saturday prior to services from 9:30 to 10:45 am. Interment will be at 3:00 pm at the Bountiful City Cemetery, 2224 South 200 West, Bountiful, Utah.

The family of William Theral O'Bryant created this Life Tributes page to make it easy to share your memories.