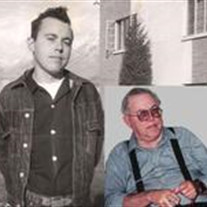 William “Bill” Vern Reid died at home Oct, 11, 2011 from complications caused by kidney cancer & diabetes. He was born Dec 27, 1933 in Greybull Wyo. to Bernice Sackett & William John Reid. Bill sprouted up tall just like the many beans, oats, & weeds grown on the 240 acres family farm. He graduated from Greybull High School, BYU & obtained a masters degree at The University of Utah in mechanical engineering. His engineering carrier included short time with the Boeing Airplane Company in Wichita Kansas and then a lifetime with the United States Air Force at Tooele Utah, Hill Air Force Base Utah, Englewood Colorado, Promontory (Thiokol) Utah and back to Hill Air Force Base. On Mar 20, 1958 he married Venla Whipple in the Mesa, Arizona, LDS Temple. They lived in Arizona, Wyoming, & Kansas before finally settling in Clinton UT. Except for working in Colorado from 1972-1975 he lived in Clinton for over 45 years. They had 6 children, Vern, John, Jeff, Katherine D’lynn, Tod, & Laurel. Bill was a High Priest in the LDS church. He always enjoyed attending Sunday meeting. Bill was a quiet man. He enjoyed scientific magazines, guns, TV and was a longtime member of the NRA. Although he was a man of few words, Dad loved & always enjoyed being with his family. He was frugal & he taught his family to be. He always made sure his wife, children, & grandchildren were well provided for. “Oh Bears!” We’ll miss being hugged till we pop! We Love You, Daddy! Thank You for taking such good care of us! He is preceded in death by 2 sons, John, & Jeff, his parents & 1 sister. He is survived by his wife, 4 children, 1 sister (June Hill), & many beloved grandchildren. Graveside services will be held Oct 17, 2011 at 1:30p.m. at Clinton City Cemetery. A viewing will be held on Monday, Oct 17, 2011, from 12:00 p.m. to 1:00 p.m. at the Clinton 20 Ward Stake, 1288 W. 1300 N. Clinton, UT.

The family of William Vern Reid created this Life Tributes page to make it easy to share your memories.