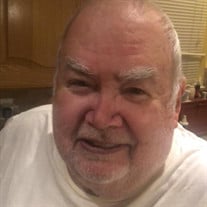 William Joseph Schenck Jr. William J. Schenck Jr. passed away April 22, 2021 surrounded by his loving family. He fought a courageous battle with cancer. His body was tired, but his will was strong. He was always there and never missed an event. He had his own way of showing his love for his family. How will things get done without him here to supervise and make sure it’s done right? He was a “grumpy” man on the outside but had a loving, accepting heart on the inside. No matter what, he loved his family and was proud of them. The world will not be the same without his sense of humor and one-of-a-kind character. He was born on December 20, 1943 to William Joseph and Sarah Frances Schenck in Somerville, New Jersey. He joined the United States Air Force in 1963 and retired in 1971. He joined the National Guard where he served many years as a civilian employee. Afterward he transferred to the Bureau of Land Management where he retired from government service. He did many part time retirement jobs including his own business, Huffy bicycles and Sam’s Club. On April 14, 1967 he married Sue Elaine Griffiths in St. George, Utah. They have four daughters, Lori (Steve) Anderson Martin, Michelle Lynn (Jeff Cramer, deceased) Schenck, Christine (Erich) Harvey, and Katherine (Eric) Williamson. They have 15 grandkids, 14 great grandchildren (with one on the way) and 3 great-great-grandchildren. He is survived by his brother, Tom (Jo) Schenck; sister, Joan (Bill) Markussen and in-laws, Russell (Arlene) Griffiths. Preceded in death by his parents and wife’s parents and many extended family. We would like to thank Davis Hospital ICU, Ogden Regional Hospital, and Utah Hematology and Oncology, especially Dr Gray and associates, for all their care and support. “Tuck and roll” “Don’t let the door hit ‘cha on the way out” A celebration of life will be held at a later date Condolences can be sent to the family at www.premierfuneral.com

William Joseph Schenck Jr. William J. Schenck Jr. passed away April 22, 2021 surrounded by his loving family. He fought a courageous battle with cancer. His body was tired, but his will was strong. He was always there and never missed an... View Obituary & Service Information

The family of William "Bill" Joseph Schenck Jr created this Life Tributes page to make it easy to share your memories.