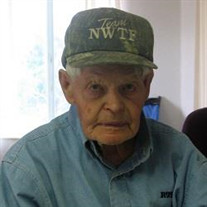 William John Sims, of Callao, Utah, passed away on May 19, 2018. He was 105. He was born on May 6, 1913 in Ely, Nevada. He attended school in Gandy, UT for grades 1-8. He was drafted into the U.S. Army in June of 1941 and after his honorable discharge in 1943, he enlisted into the U.S. Navy and served in the 147th NCB. His Unit embarked for Okinawa on May 26, 1945 from San Francisco on the S. S. Sea Devil and arrived on July 15, 1945. After his tour of duty ended, he returned on the USS Saratoga, and then home to Gandy, UT to pursue an occupation which led him to Ely, NV. On Oct. 22, 1949 he married Lesta Coila Barnhill (deceased) with her 4 children, Jeroldean Bell (Clair), James Wilfong (deceased), Connie Cameron (John Stalford), Bonnie Andranigian (Andy) and together they had 6 children, Estella Wolf, Pamela Proctor (Mike), Debbie Wolf (Mike), Janet Myers (Mike), Mechell Alder (Bill) and John Alan Sims (Rana). Later, after moving to Salt Lake from Ely, NV, John and Lesta were sealed in the LDS Temple on May 27, 1960 in SLC, UT. John (William) worked as a Heavy Equipment Diesel Mechanic for Mac Truck and later, Utah Sand & Gravel in Salt Lake while making his home in Murray, UT. He retired in 1972 and moved back to Gandy, UT, to finally pursue his longtime passion - farming. In 1987, John and Lesta moved to a ranch in Sugarville, UT and Lesta passed away on June 11, 1989. John moved to Callao, UT in 1998 and has resided there since. A unique soul, John (William) was very honest, hard- working, compassionate, selfless and humble. He enjoyed farming, prospecting, and spending time with his siblings. He was a loyal and loving husband, a supportive and beloved father, and treasured grandfather to 19 grandchildren, 25 great-grandchildren and 3 great-great-grandchildren. John will also be forever remembered by his numerous nieces, nephews, extended family and dear friends. John (William) was loved beyond words and will be missed beyond measure. A memorial service will be held May 30, 2018 at the LDS Church (6440 S 700 W) in Murray, UT with a viewing from 12:00 – 1:00 pm. The service will begin at 1:00 pm and will conclude with a graveside ceremony at Larkin Sunset Gardens – 1950 E Dimple Dell Road (10600 S).

The family of William John Sims created this Life Tributes page to make it easy to share your memories.