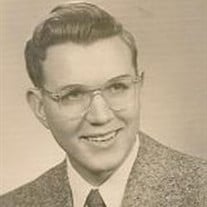 William Dieudonne “Don” Tidwell was born to John Leslie Tidwell and Ida Geraldine Carson Tidwell in June 1932 in Nampa, Idaho. He graduated from Homedale High School and attended Northern Idaho College of Education. He graduated from Brigham Young University with a masters in Geology and earned PhDs in Botany and Geology at Michigan State University. He was a professor at Eastern Washington State College and established their Geology department. He joined the faculty of Brigham Young University in 1967 in the Botany department with a specialty in paleobotany. He traveled the world collecting fossil plants and named many type specimens. He was a member of several scientific organizations and presented papers and displays at their annual meetings. He was the author of text books and field guides. He retired in 2000 and continued his research as a professor emeritus. Don served in the U. S. Army during the Korean Conflict at Fort Ord, California. He was a ranger/naturalist in the National Park Service at Yosemite, Olympic National Park, Lake Mead National Recreation Area, and Blue Ridge Parkway. He is survived by his wife, Ann and four children: Donnae, Larissa, Drannan (Sossity), Leith (Nichol); grandson, Brighton; sisters, Ardith Parsons (Mike) and Sharon Seibert; and brother, Gerald Tidwell. He was preceded in death by siblings, Jean Smith (Cal), Martha Roberts (Robert), John Tidwell, and a son, Eric Ward Tidwell. Don enjoyed taking his students and his children on field trips, exploring, and collecting fossil plants all over the western United States. He liked reading, music, old radio shows, and vintage television. He loved family reunions and finding a new audience for his jokes in the coming generations. Funeral Services will be held at 11:00 a.m. on Monday, September 14, 2015 at the Edgemont 6th Ward building located at 4056 Timpview Dr., Provo, UT. Visitation will be from 9:30 to 10:45 a.m. prior to the services. Burial with military honors will follow the services at the Provo City Cemetery.

The family of William D. Tidwell created this Life Tributes page to make it easy to share your memories.