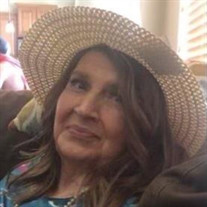 Wilma Jean Eidson (nee Risner) was called home by her lord on Friday, March 12th, 2021 after a brief illness. Wilma was born January 26th, 1940 in Hope, Kentucky to Boyd and Ethel Risner. Wilma and her family moved to Ohio soon after and Wilma graduated in 1957 from Bethel High School in Tipp City, where she was homecoming queen her senior year. While working as a secretary in Dayton after graduation, Wilma happened to pull into a drive-in diner next to a young Airman stationed at Wright-Patterson Air Force Base. After a brief courtship, Wilma married Charles Richard (Rick) Eidson of Denver, Colorado on August 20th, 1960. Soon after their marriage, the young couple relocated to Rick’s hometown of Denver, where the first of their children, Steve, was born in 1965. Rick took a job at Hill Air Force Base in Utah and the family moved once again, to Ogden. Another move found them in North Ogden, where their second child, Danielle, was born in 1972. Finally, in 1975 the family settled in Roy. Over the years, Wilma held various secretarial positions, including with Allis-Chalmers and Weber County. But the lifeless papers she typed could not satisfy Wilma’s kind and giving heart. After hearing from a fellow County employee of the difficulty Child Protective Services had in finding loving homes for children whose parents were unable to properly care for them, Wilma stepped up to be of service. This became Wilma’s calling, with her eventually leaving her job at the County Attorney’s office to have the time to care for the youngest, and most vulnerable, members of our community. Over the years, Rick and Wilma helped to raise literally dozens of young men and women, ranging in age from six months to 17 years. One of these children, Katrina, was adopted by Rick and Wilma. Wilma’s favorite subject in school was history and in her later years she spent countless hours researching her family’s history, tracing many relatives back to the Civil War, the first European exploration of Kentucky and Tennessee, and even the Revolutionary War. Wilma traced her lineage back to Wales and Germany and spent many days wondering what their lives would have been like and how they had managed the arduous move to the new world. Wilma was blessed to spend her last years living with her daughter, Danielle. Wilma spent many hours with those closest to her heart and grew close to her great-grandchildren. You will not find Wilma’s name adorning a great skyscraper or bridge. You will not find a stretch of highway or some other public work named in her honor. But every day you spend in our community, you are reaping the benefits of Wilma’s devotion to those many children she cared for, loved, and in ways both large and small, helped to become much better people. Wilma was preceded in death by her parents, Boyd and Ethel Risner; her brother, David Risner; stepdaughter Jodie Marie Eidson; and her husband of 40 years, Rick. Wilma is survived by her brother, Jimmy Risner; children Steven, Danielle and Katrina; son-in-law Howard McArthur; daughter-in-law Margarida Eidson; grandchildren Skylar, Weston, Kelsey, Ryley, Kyle, Derek and Clay; and great-grandchildren Emryee, Zayden, Ember, Beau and Ford. Funeral services will be held at 2:00 pm, Saturday, March 20, 2021 at Premier Funeral Services, 5335 South 1950 West, Roy, Utah with a viewing one hour prior.

Wilma Jean Eidson (nee Risner) was called home by her lord on Friday, March 12th, 2021 after a brief illness. Wilma was born January 26th, 1940 in Hope, Kentucky to Boyd and Ethel Risner. Wilma and her family moved to Ohio soon after and Wilma... View Obituary & Service Information

The family of Wilma Jean Eidson created this Life Tributes page to make it easy to share your memories.

Wilma Jean Eidson (nee Risner) was called home by her lord on...