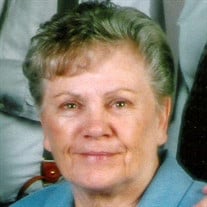 Wilma Dustin Hill, age 85, of Washington, Utah, passed away from this life on Saturday, November 24th, 2018 at her family’s home in West Jordan, Utah. The youngest child of William S Dustin and Sarah Adelaide “Addie” Morley, she was born on October 1, 1933 in Price, Utah. Wilma was often called on to help her siblings care for their families and consequently spent her childhood in many places throughout Idaho and Utah, having a particular fondness for the time she spent in Driggs, Idaho. While living in the Idaho Falls area, she graduated from Ucon High School in 1951. She married her husband, Weston D. Hill, in June of 1953. In the early years of their marriage, she joined Weston during his military service at Fort Riley, Kansas, then lived wherever Weston’s job in the Union Pacific Railroad took them, including Nampa, Idaho and Dillon, Montana. They settled in Shelley, Idaho in 1963, then moved to Pocatello, Idaho in 1973. Later, in 1986, they moved with the railroad to Salt Lake City, Utah, with a few months also spent in Omaha, Nebraska. After retiring from the railroad, the couple traveled, visiting in St. George and with various family members for a couple of years before moving permanently to Washington, Utah. They enjoyed 25 years there together, the longest time that they had ever spent in one place. They remained there until very recently when they went to West Jordan to live with their son, Larry. Wilma was best known as a dedicated wife and mother who labored for and served her family tirelessly. Wilma is survived by Weston, her husband of 65 years, and two sons: Kerwin D. Hill (and wife Debora) of Caldwell, Idaho, and Larry K. Hill (and wife Jennifer) of West Jordan, Utah. She is also survived by seven grandchildren: Brian Dickson, Terra Hill, Ian Hill, Hailey Beale, Lia Legones, Dustin Hill and Jaden Hill. At the time of her death, she was blessed to have 12 great-grandchildren. She was preceded in death by her parents and her siblings: Maurine Freeman, Myrle Engberson, William “Billy” Dustin, and Marilyn Lusk. Services will be held at 11:00 a.m. on Thursday, Nov. 29, 2018 at the Copper Hills stake center for the Church of Jesus Christ of Latter-day Saints at 5176 W. Parr Drive in West Jordan, Utah. Viewing will take place before the funeral service at 9:30 a.m. to 10:45 a.m. Burial will be conducted afterwards at the Herriman City Cemetery.

The family of Wilma Dustin Hill created this Life Tributes page to make it easy to share your memories.

Wilma Dustin Hill, age 85, of Washington, Utah, passed away from...