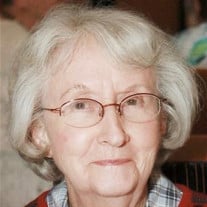 Wilma Hawkins Walgren 1924 - 2016 Wilma Hawkins Walgren, our sweet 92 year-old wife and mother died October 21, 2016 of Alzheimer’s disease in South Jordan, Utah. She is the third of four children, born January 31, 1924 in Logan, Utah, to Oswald Thomas and Jennie Luverne Robbins Hawkins. She will miss her eternal sweetheart of 71 years, Ralph Castleton Walgren, sealed in the Salt Lake Temple on October 24, 1945. Her posterity includes son Kent Logan Walgren (deceased), daughter Mary Ann Snowball (David J.), daughter Peggy Showalter (Donald L. III), 13 grandchildren, 34 great-grandchildren, and two great-great-grandchildren. She is preceded in death by parents, sisters LaRhea Marchant and Gwendolyn Polson, brother Dale R. Hawkins, son Kent, and grandson Mark W. Snowball. Wilma grew up in Bluffdale and Sugarhouse, graduating from South High in 1942. She lived most of her life in Salt Lake City, but also resided in Eugene, Oregon, Saratoga, California, and St. George, Utah. She spent her life loving, especially her husband and children. She was a faithful wife, mother, daughter, sister, friend, volunteer, and LDS senior missionary. She was an excellent artist, seamstress, quilter, cook, gardener, and traveler. We will miss her spunky and common-sense personality, her graciousness to family and friends, the times she made us laugh, and her spirit of discipline and endurance. Upon departing her home, her last words were always: “Come and see us.” We are planning on it, soon enough. Her life and ours will continue, loving and being together forever. We will celebrate her life on Saturday, October 29, 2016 at 12:00 p.m. at the LDS Winder 7th Ward Chapel, 4350 South, 1100 East. Viewing and visitation will begin at 10:00 a.m. Interment will be at the Salt Lake City Cemetery. A special thank you to Legacy of South Jordan, and Brighton Hospice for friendship and care.

The family of Wilma H Walgren created this Life Tributes page to make it easy to share your memories.