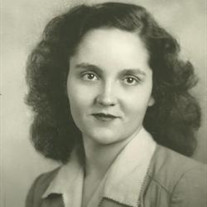 Winnifred Woolsey Wade Van Blerkom was born in Salt Lake City, Utah on July 27th, 1924. She was the first daughter and second child born to Carl Woolsey and Winnifred Cummings Woolsey. Winnifred, though she joked about the trials and tribulations of being a middle child, adored her big brother Lacelle, known as Les—her hero—and her “baby sister” Nan. Winnifred grew up as part of the aptly-named “Greatest Generation,” and her childhood during the Depression taught her well the virtues of hard work, service, and sacrifice; virtues which she exemplified for her entire life. Despite hard times, Winnifred enjoyed growing up in a close and loving family. She always talked with fond affection of the six years she spent on a small farm with her mother and her grandparents while her Dad had to live away from the family to secure work. She attended Oakwood Elementary school, and learned early that homework and chores came before play, though there was plenty of play and good fun. The family moved back into town in 1936, to a small house on DeSoto Street, built ten years earlier, and Winnifred, now 12, went on to Irving Junior High School and attended church at the Capitol Hill Ward of the Church of Jesus Christ of Latter-Day Saints. She had many friends, and enjoyed “mutual”—now Young Women—very much. After a year at Irving (she was part of an experiment in which seventh and eighth grades were combined in one year), Winnifred attended West High School, where she excelled in her studies, was on the swim team, and enjoyed cheering her big brother on at basketball games. It was at one such game that she met Edgar Arthur Wade, who became her first sweetheart. Winnifred graduated West in 1941, completed a year at the University of Utah, after which, on May 17, 1942, she and Ed were married. Ed fought bravely and courageously in World War II in Alaska’s Aleutian Islands, and then in Europe where he was killed in the Battle of the Bulge January 14, 1945. Afterward, in typical fashion, Winnifred—a lady of extraordinary strength and courage in her own right—moved across the country to New York City. She studied piano at Columbia University, then attended art school where she had dreams of a career as a fashion designer, among many other pursuits, including being a legal assistant and doing some modeling. On July 27, 1953—her 29th birthday—she married Walter Van Blerkom, a native New Yorker she met through friends. Shortly after the wedding they left for Walter to fulfill an Army assignment at Ft. Leavenworth, Kansas. Walter and Winnifred then lived in Salt Lake City for two years, where Winnifred worked alongside her husband in his stock brokerage office. In 1956, the two returned, with their daughter, Leslie to New York, and in 1962, to their delight, a son, David, joined the family. After several happy years in New York, Winnifred, Leslie and David, moved to Greenwich, Connecticut, where Winnifred worked for Merrill Lynch in Stamford, CT as the Branch Manager’s Executive Assistant. Finally, in 1998, Winnifred moved back home to her beloved Salt Lake City where she enjoyed her retirement, pursuing charity work, and helping friends and neighbors. She was able to pursue her creative and artistic hobbies such as cooking, baking, sewing, knitting, quilting and doing beautiful tatting. She also enjoyed mystery novels and a good game of Solitaire on the computer. Winnifred passed away peacefully and quietly on July 20, 2014. She will be loved and deeply missed by her children, Leslie and David, her grandchildren by birth and marriage: Dallin, Samantha, Brian, Jennica, Courtney, Christopher, and Tiffany, and her two great-grandsons, Holden and Owen.

Winnifred Woolsey Wade Van Blerkom was born in Salt Lake City, Utah on July 27th, 1924. She was the first daughter and second child born to Carl Woolsey and Winnifred Cummings Woolsey. Winnifred, though she joked about the trials and tribulations... View Obituary & Service Information

The family of Winnifred Van Blerkom created this Life Tributes page to make it easy to share your memories.