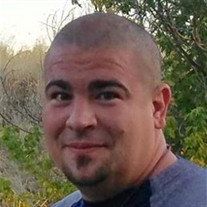 Zachary McCurdy October 19, 1982 – August 4, 2016 Our loving husband, son, brother, and uncle, Zachary Ryan McCurdy, 33, passed away on August, 4, 2016, of causes related to Ankylosing Spondylitis. Born on October 19, 1982, in Salt Lake City, Utah, Zach was adored by his parents, Judy Winegar and David McCurdy, whom he loved and honored, throughout his life. He grew up in Salt Lake City and Las Vegas, Nevada, the fifth of sixth siblings, all of whom contributed to and benefited from his goodness. A care-giver by nature, Zach was “the true glue that held his family together.” Ever vigilant in maintaining family connections, Zach was frequently checking in, reaching out, and making sure everyone was aware of and there for each other. His thoughtful kindness and abundant generosity extended to many beyond his immediate family which is why Zach’s “heart of gold” is his legacy. Even when struggling through some of life’s most difficult challenges, Zach never lost his sweet compassion, which helped him to triumph in the long run. A member of the Church of Jesus Christ of Latter-day Saints, Zach was most recently serving as ward librarian. Among his life quests, Zach found happiness hiking in the canyons, cooking in the kitchen (Zach Potatoes, for example, have been a family favorite for decades), planting in the garden, and watching in the ninth, if the Yankees were winning. He counted a family trip to Yankee Stadium, and his big adventure in Jamaica with the family of his childhood friend, Marcus, among his best times. From an early age, Zach loved sports. A gifted athlete, his passion for baseball drove him to excel on his high school’s team. Zach grew up to be an avid Ute fan, despite his father’s dismay and unwavering devotion to Brigham Young University. Always a “big kid at heart,” Zach maintained a child-like joy when it came to celebrating the holidays and nature’s beauty, scenes from which would often appear via Zach’s phone. The best moment in Zach’s life was the one in which he met Ashley Sorensen. On April 2, 2015, Zach and Ashley were married and he clearly cherished every day of their life together. From their second meeting, Zach and Ashley never spent another day apart. Besides Ashley and his parents, Zach is survived by his siblings; Heather (Gavin) Erickson; Megan (Bobby) Cox; Matthew; and Landon (Christa); his nieces and nephews, Madison, Jane, Max, Ada, Bentley, Mason, Bailey, Lillie, Jozie, Jonas, and Ian; his father- and mother-in-law, Don and Jackie Sorensen; his brother-in-law, Don, Jr. (Karie) Sorensen; his sister-in-law, Anna (Hyrum) Donis; and his grandmother, Lela McCurdy. Zach will also be greatly missed by his aunts, uncles, and cousins. Preceded in death by his sister Kimberly, and his friend, Frank Spenia. A celebration of his Zach’s life will be held at the LDS Ward Chapel, located at 9880 South 3100 East, Sandy, Utah, on Tuesday, August 9, with a viewing from 10:00 to 11:30, and the funeral memorial at 12:00 noon. Interment at Larkin Sunset Gardens, 1950 E. Dimple Dell Road (10600 South), Sandy, Utah. Zach’s family expresses heartfelt gratitude for the overwhelming love and support from family and friends.

The family of Zachary Ryan McCurdy created this Life Tributes page to make it easy to share your memories.