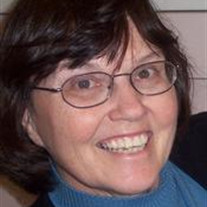 Jane Eldora Ashby,62, was found on October 12, 2013 after being missing since July 31, 2013. She passed away around August 2, after losing control of her vehicle while coming down middle canyon near Tooele, UT. Jane was born to Minor Henry Patterson and Eldora Jane Smith on January 14th, 1951 in Ithaca, New York where she lived until she was 8. She then moved with her family to Southern California where she grew up and continued on to college at Chapman University. As a youth, her passion was singing, and she was a straight A student. She eventually went on to receive a degree in accounting and finance from the University of Utah. Jane met her husband, and eternal companion, Grant Ashby on the ski slopes when she helped him up from a fall after he had been showing off. That's how she was, always thinking about others and always willing to help anyone who needed it. Jane and Grant were married on October 16, 1976, and later sealed together for time and all eternity in the Salt Lake Temple on April 20, 1982. Jane loved the gospel of Jesus Christ, and she had a truly converted heart. She was baptized a member of The Church of Jesus Christ of Latter Day Saints, on April 18th, 1981 and never looked back. Jane was a multi-tasker, and expertly juggled being a wonderful wife, an excellent mother and a professional career woman. She also developed a deep passion for genealogy, and spent much of her life doing family history work for her family and for others. She loved to serve those around her, and never passed up an opportunity to do so. Jane was also a devoted grandmother, and loved to dote on her grandchildren. Jane is survived by her daughter, Michelle Graves, her step daughter, Cindy Wilde and her two step sons, Doug and Mark Ashby. She is also survived by her sisters, Joanne Patterson and Joyce Krohn, and her brother, Jim Patterson, as well as many grandchildren and great grandchildren. She is preceded in death by her loving husband, Grant Ashby, and by her parents, Minor and Eldora Patterson. Jane was a beautiful, smart, caring and kind person. She touched many lives and was incredibly loved by all those who knew her. She will be greatly missed and always remembered. Funeral Services will be held at 192 W. 200 S. Tooele, UT 84074 on Friday, October 25. There will be a visitation gathering at 10:00 to 10:45 AM, followed by the services at 11:00 AM. In lieu of flowers, donations can be made to The Boy Scouts of America (who so bravely found Jane) at either of the following links: General Donations: http://aplacetogive.scouting.org/magento/index.php/give-local-great-salt-lake.html Send a scout to camp: http://aplacetogive.scouting.org/magento/index.php/send-a-kid-to-camp-great-salt-lake.html

Jane Eldora Ashby,62, was found on October 12, 2013 after being missing since July 31, 2013. She passed away around August 2, after losing control of her vehicle while coming down middle canyon near Tooele, UT. Jane was born to Minor Henry... View Obituary & Service Information

The family of Jane Eldora Ashby created this Life Tributes page to make it easy to share your memories.