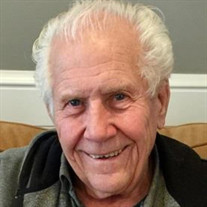 Rodney Lawrence Whitlock, a devoted family man and kid at heart, passed away July 20, 2021 after battling Alzheimer’s. Born June 15, 1933 in Manti, he approached life with wide-eyed wonder. Rodney cultivated this sense in others, whether spearheading family camping trips or stringing up backyard bridges for the grandchildren to climb. In 1956, Rodney met the love of his life, Karin-Maria Wanke, while at a church gathering. Love at first sight, they married June 20, 1957 in the Manti Temple, later letting in Sugar House for the last 60 years. Nicknamed “Lucky” by one of his grandchildren, the affectionate moniker stuck and became more fitting over the years. Twice struck by lightning, among many other mishaps, Rodney didn’t let the prospect of danger stop him from seeking adventure. Nor was he too concerned with uppity societal expectations and norms. His wardrobe included mismatched shoes and 1970s-era shirts. He was prone to falling asleep in random places. One time, tools in hand, he nodded off under his car, startling the neighbors across the street who thought he had been run over. An avid outdoorsman, no doubt Rodney was dreaming about a future hunting of fishing trip. He was always willing to lend a hand. During a trip to New York City, he spotted a couple struggling to lift a couch up steep stairs. After helping, Rodney couldn’t understand why no one else in the crowd stopped. An active LDS member, Rodney had many church callings, but particularly shined when serving in the Boy Scouts of America. He spent fifty years as Scout Master, earned many awards and recognition, including the Silver Beaver and Silver Buffalo awards for outstanding service and dedication. Rodney worked for the Utah Department of Transportation and retired after forty years – and served in the National Guard for 21 years. He is survived by his wife, Karin, and five children: Pam (Kirk), Hal, Ryan (Kim), Darren (Paula), and Kim (Blake). He has ten grandchildren: Justin (Theresa), Brianne (Paul), Stephanie, Danielle (Court), Brittney (Patrick), Jared (Fiona), Andrew, Adam, Conner, and McCall. He also has four great-grandchildren, Ella, Carter, Silas, and Aria. The family would like to thank all the doctors and nurses who cared for him over the years, especially for staff at the William Christofferson Salt Lake Veterans Home, where he resided the last two years of his life. Universally adored, his family will miss him – and always look to him as an example. We’re the Lucky ones….. Viewings will be held Sunday, July 25th at 6:30-8:00 p.m. and Monday, July 26th at 8:30-9:30 a.m. at the Edgehill Ward, 1750 S. 1500 E., SLC. Following Monday viewing, funeral services will be held at 10:00 a.m. Interment will be located at Elysian Gardens 1075 E. 4580 S., SLC. MASKS ARE REQUESTED

Rodney Lawrence Whitlock, a devoted family man and kid at heart, passed away July 20, 2021 after battling Alzheimer&#8217;s. Born June 15, 1933 in Manti, he approached life with wide-eyed wonder. Rodney cultivated this sense in others, whether... View Obituary & Service Information

The family of Rodney Lawrence Whitlock created this Life Tributes page to make it easy to share your memories.