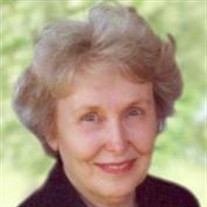 Shirley Thomas 1925 – 2020 Shirley Ann Wilkes Thomas died peacefully in Salt Lake City, Utah, on Tuesday, January 7, 2020. Shirley was born in Inglewood, California, on February 26, 1925, to William Leroy Wilkes and Eva Nancy Angeline McElrath. Shirley grew up in southern California and Mesa, Arizona. She graduated from Brigham Young University with a bachelor’s degree majoring in both English and food science. She was a skillful teacher who could adapt her teaching to the needs of her students whether it was in a first-grade class in New York, a high school English class in Oregon or Utah, or a food science lab at BYU. Shirley married Robert K. Thomas in the St. George temple in 1948. They were doting parents and grandparents to their children, Cornel W. Thomas (Gretchen), Ryan L. Thomas (Ann), and Nancy Angeline “Angie” Hinckley (Stuart), and to their eleven grandchildren. Throughout her long life, Shirley took great delight in spending time with her family, which eventually included twenty-eight great-grandchildren. She also expressed her affection for her family with carefully composed letters of encouragement and birthday cards with personalized “jingles.” Shirley was a devoted member of the Church of Jesus Christ of Latter-day Saints. She held many ward and stake positions as a teacher. She served as a ward and stake Relief Society president and was a member of the Relief Society General Board (1971-78). She also served six years as second counselor in the Relief Society General Presidency (1978-83) until Bob and Shirley were called to preside over the Australia Melbourne Mission. After their return, Shirley used her gift as a writer to preserve events from her personal history and to co-author numerous religious books including Words for Women, In Wisdom’s Path, and Behold Your Little Ones. She is proceeded in death by her husband Bob, son Cornel, daughter-in-law Gretchen, and grandson Sean Thomas. Funeral services will be held on Saturday, January 18, 2020, at 11:00 AM at the LDS chapel at 630 East 100 South, Salt Lake City, Utah 84102. A viewing will be held that morning from 9:00 to 10:30 AM. Interment will be in the Provo City Cemetery. In lieu of flowers, please consider contributing to the Robert K. Thomas Endowed Scholarship Fund, BYU Honors Program: https://ldsp-pay.ldschurch.org/donations/byu?funds=30120240

The family of Shirley Ann Wilkes Thomas created this Life Tributes page to make it easy to share your memories.